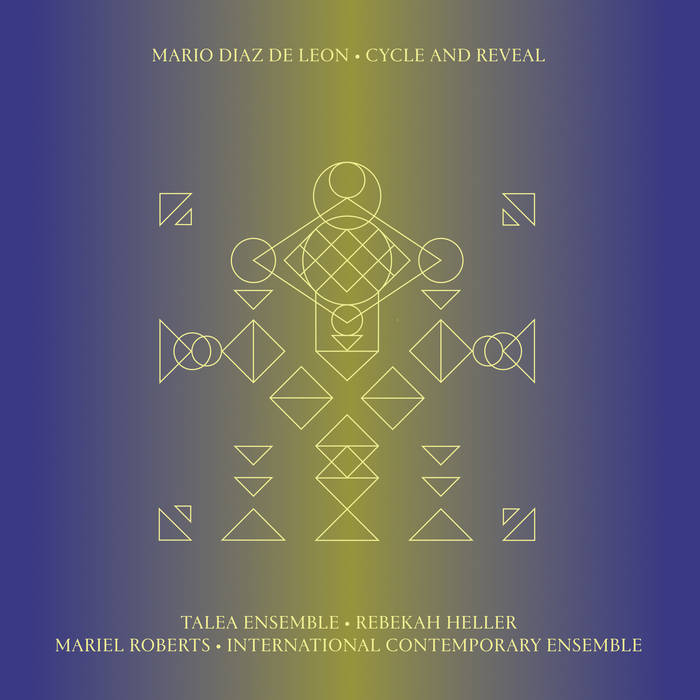 Denovali is pleased to present Cycle and Reveal, the fourth full length LP of contemporary classical works by acclaimed composer Mario Diaz de Leon. Featuring bold performances by a cast of longtime collaborators, this compilation is an essential chapter in his celebrated series of recordings for acoustic instruments and electronics.

The A-side features two works written in early 2017, which colorfully embrace hypnotic repetition alongside dynamic contrasts and distinctly embody the electrifying post-minimalism that Diaz de Leon is known for. Opener Sacrament is written for a trio of musicians from Talea Ensemble and features the composer’s shimmering, bass heavy electronic production. This energetic piece, driven by the virtuosity of marimba player and Talea executive director Alex Lipowski, makes use of rapid-fire arpeggiations and heavy rhythmic unisons. These are starkly contrasted with moments of reverberant echo, bursts of noise in the flute and electronics, and ecstatic rhythms. Labrys, written for ICE bassoonist Rebekah Heller, builds on the celebrated legacy of solo + electronic works heard on his 2015 album The Soul is the Arena. Built around virtuosic interplay between bassoon and synthesizer, Labrys features shifting and hypnotic repetition alongside expansive melodies and sub-bass frequencies.

The B-side consists of two works composed in July of 2016 which draw from primal, incantatory, and improvisatory sonic landscapes. Irradiance, a collaboration with cellist Mariel Roberts, begins with a series of spacious riffs exploring the extremes of the cello’s register and transforms over time into a climactic frenzy of noise loops. Tuning the cello’s low C down to a growling G, Roberts interpreted the sounds of each pre-recorded loop by ear. The piece gradually builds from cavernous depths into an ecstatic climax of anarchic noise. Concluding track Mysterium is written for the ICE trio of flutist and ensemble founder Claire Chase, clarinetist and artistic director emeritus Joshua Rubin, and bassoonist and current artistic director Rebekah Heller. Archaic melodies, improvised heterophony, spectral transformations, echoes of Klang-era Stockhausen, and the colorful noise of Moog and Ciat-Lonbarde synthesizers combine to create an expansive and wildly ritualistic atmosphere.

Cycle and Reveal out 27 September 2019 via Denovali.

Bandcamp Daily  your guide to the world of Bandcamp